This how the de Mitton manor house may have looked after the “H” wings were added in the early 14th century. The structure was a “waddle and daub”. The original manor was probably the center hall. The de Mittons may have occupied the center hall during their tenure, but were no longer manor Lords after 1312 when the H additions most likely were added. Illustration courtesy of Ivo David, 2013.

The in-feuded manor was a common way to grant land in exchange for fidelity and military service if called upon by the superior lord. The Normans needed every man they could get. Accounts are there were at best only about 10,000 in England after the Conquest. As such the Normans were a small minority of the population in the early years after 1066 and were ruthless as a result. 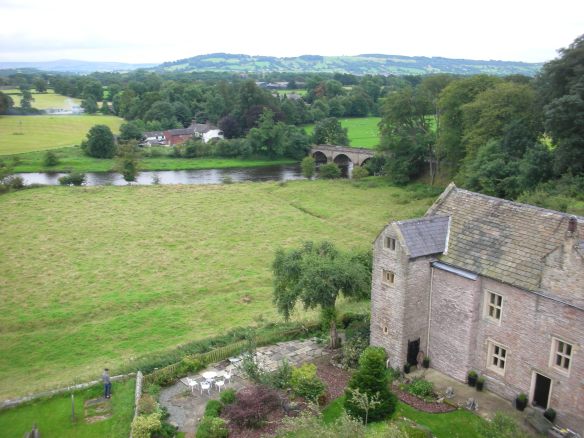 Great Mitton Hall, looking across the Ribble towards Whalley.

Ralph the Red was a Norman Lord of the manor and rector of Mitton church after 1103. He was a direct beneficiary of a grant from Robert de Lacy. However, Ralph is never named on any genealogy as a son of Robert. We can’t document any more than this so far, except that his mother was an unknown mistress of Robert de Lacy according to  documented sources.The grants were restated in 1135 by Ilbert (2) who was the eldest son and heir of Robert. It is he who refers to Ralph as ‘his brother’ in this circa 1135 witnessed charter.

“Robert (de Lacy) immediately bestowed Aighton, together with Great Mitton and other manors, upon Ralph le Rous, who was to hold them by the service of half a knight’s fee. (fn. 20) This grant was between 1135 and 1141 confirmed by Ilbert de Lacy, who in his charter styled Ralph ‘my brother.’ Ralph was ancestor of the Mitton family, who retained possession for some 150 years, though there is little to record of their tenure. (fn. 21) In 1204 Stephen de Hamerton claimed a plough-land in Aighton against Hugh de Mitton, but released his right in 1208 on receiving 14 marks from Hugh. (fn. 22) Ralph son of Robert de Mitton in 1235 secured from Jordan de Wheatley the acknowledgement of his title to half an oxgang of land in Aighton, (fn. 23) and seven years later Ralph was holding the fourth part of a knight’s fee in Aighton, &c., being part of the dower of the Countess of Lincoln. (fn. 24) He was party to various suits in 1246 respecting tenements in Aighton, (fn. 25) and his widow Margery was claiming dower in certain lands there as late as1291″- British History Online-http://www.british-history.ac.uk/vch/lancs/vol7/pp1-20#h3-0003

This is how a typical Norman village looked in the early 12th. century and  represents how “Mit-ton” may have looked located along the Ribble near where Great Mitton Hall is today. 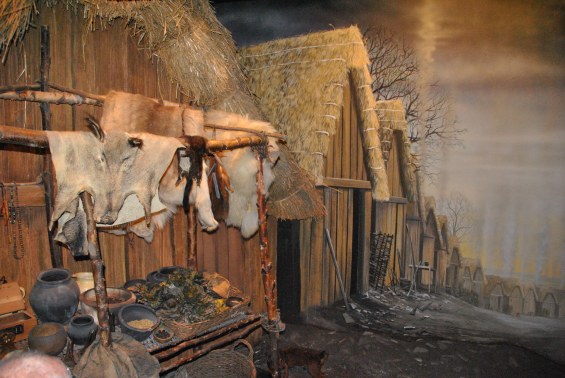 Surnames were not common in the 12th century. Ralph “the Red” may not have needed to use one at the time of the 1102 charter. We know his descendant Jordon did on legal documents for the poll tax requirement around 1219. Jordon may have wanted to identify himself as “de Mitton” after one of his family’s chartered “magna” manors, much like his grandson Otto de Mitton (or Bailey) did. Otto received a manor at Bailey from his older brother Hugh de Mitton around 1200. However we still identify Ralph the Red as the first “de Mitton” (meaning of Mitton manor) from the grant to him Nov. 23, 1102 and as founder of All Hallows or Mytton church.This is another important clue to Ralph’s status as the churches were income producing for the Lord of the manor and separate from the superior feudal Lord.

Great Mitton from Aighton toward Winkley Farm. This is Ralph the Reds demsnse land.

Ilbert was called upon to identify Ralph in order for the charter to be valid. Especially on lands by right of primogenitor would have been his when his father Robert died. Ilbert stated these lands were to be directly granted to “Ralph the Red” including another manor abode at Clitheroe Castle site. Ilbert, Roberts son later confirmed his fathers first Nov. 23, 1102 charter with a second restatement after1135 in which he refers to Ralph as his brother.

Early on the newly arrived Normans sub-feudal to immediate family members and practiced a kind of social apartheid toward the local Saxons which Ralph the Reds mother may have been and thus Ralph being illegitimate.That may explain why Ralph was never identified as a de Lacy even thought his father was. Ralph became the founder of the church of All Hallows at Mitton, established in 1103.

“Mitton and Aighton,” says Whitaker,” having been granted together, when a parish church was founded at the former place, the later, belonging to the same lord (Ralph the Red), was included in the parish”. – Centenary record,1894 – John Gerard. 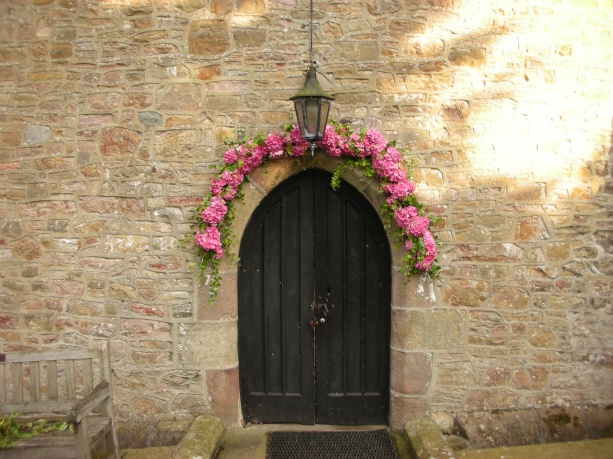 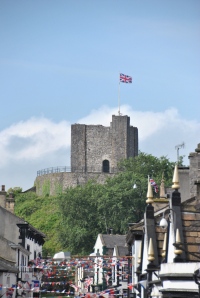 Ralph’s  ‘oxgangs” grant at Clitheroe is also revealing. Clitheroe had been a site of fortification from the Saxon era (if not well before to Roman times). Clitheroe`s steep hill was already considered a strategic location by the Conqueror who came to this area of Yorkshire after Hastings with Ilbert (1) during the Harrying of the North campaign. William the Conqueror had a reputation for recognizing such strategic locations. A even more substantial stone castle had been built there by the end of 12th century and maybe some stone form well before beginning with Ralph the Reds arrival. The manor at Clitheroe was one many manor grants to “Ralph the Red” in 1102. 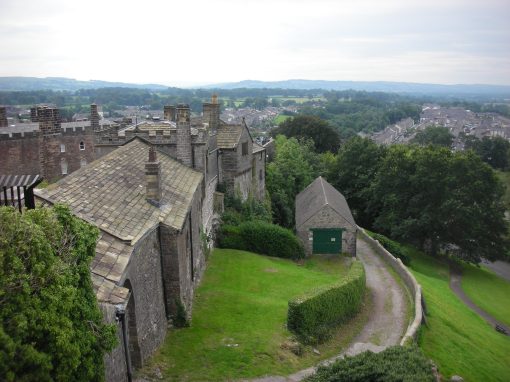 Ralph was more likely to have been born at Pontefract or near there about 1080 and may have lived with the de Lacy family prior to his own personal grants of 1102. His grant is the first mention of a Norman documented at Clitheroe. The Normans would have been concerned about Saxon resistance. More than likely Norman families lived close together as much as possible in the early days of the Norman Conquest.

Ralph the Red gets “the call”

Ralph the Red became the rector of All Hallows in 1103. The rector-ship in Norman post conquest England often went to a younger or illegitimate son. (Peter de Cestria, the illegitimate son of John de Lacy became the rector of Whalley church in 1235). The passing of the rector position to a younger son became the tradition in the Mitton family until in 1215 when the Lateran Council forbade the clergy to marry. This brought to an end the close association of the parish with the lords of the manor but it took much longer to reach the remote parish of Mitton.

It was not unusual for the Normans to take family surnames from identifiable locations, especially when it was a religious site as well.  It was important to establish the Norman dominance over the Saxons in every way early on after the Conquest. They did this through the churches. The Mytton Church rector family tradition went on into the next century to include four succeeding de Mitton descendants all named Ralph until William de Kirkham becomes rector first mentioned in 1241. 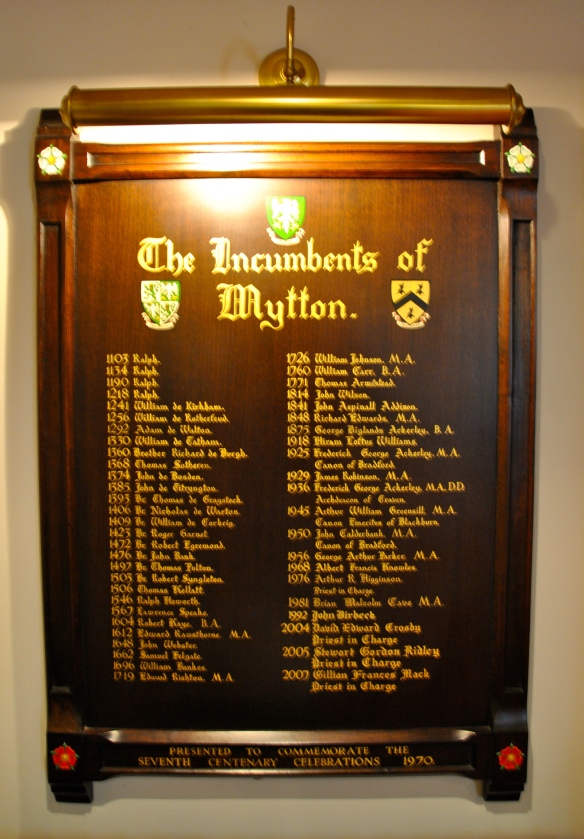 Note the first four names are Ralph, all of whom were de Mittons

*The Historical Manuscripts Commission (HMC) defines the word manor in three ways: “a Residence”, “a unit of estate administration”, and “a piece of landed property with tenants over whom the landlord exercised rights of jurisdiction in a private court”. The HMC applies the third definition to the manorial documents register.  This definition also complies with the definition used within this gazetteer. A more detailed historical definition states this unit was contained within the medieval feudal system or the “hierarchy of property rights” which was created “by this process of subfeudation [and] is emphasized by the structure of Domesday Book which, for this reason, has sometimes been called ‘a blueprint for feudalism’ “(www.domesdaybook.net/hs1620.htm). These estates did not coincide with parish boundaries. They usually included a chapelry and an area could cover one or more parishes or exist within an extra-parochial area. Governed by a lord, or a Steward, and a private court, these units controlled tenancies, local customs, local laws and land use. 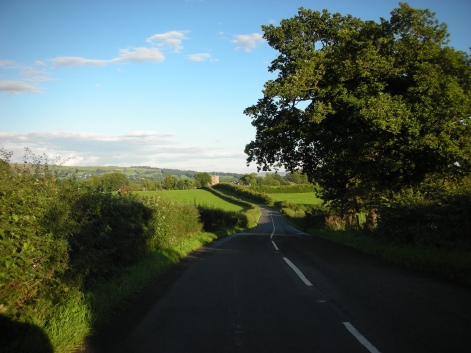